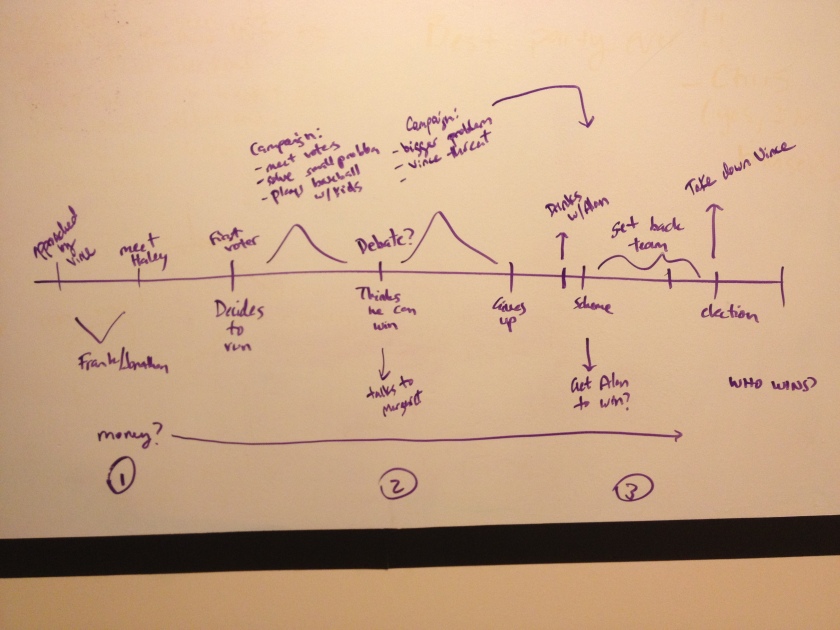 The flow charts are also useful for mapping out screenplays, such as this rough outline of a screenplay about a sham campaign I’m working on.

When I was 8 or 9 I went to day camp.  Not sleep away camp, just a place to go for 8 hours while my parents worked and in some way enriched me or just kept me away from drugs and hookers or whatever else 8 year olds get into.  You went to a few over the course of the summer and each one had a different theme.  Camp Adventuresomethingorother was the sports one, there was Camp Echo which was the nature one, and my favorite.  We’d go on nature walks and swamp excursions and get to take our shoes off and everything.  I went to this one, Camp Arts and Crafts or something, and we just made arts and crafts.  Glitter and cotton balls and popsicle sticks that turn into stick grenades, yeah it’s a thing, and the whole thing.

There were skits and singing and dancing and everything I guess you do when you realize that you want to be an actor or dancer or painter/unemployed when you grow up.  I did all the things, painted trees and made a flag out of construction paper and acted in the skit.  I did an impression of Steve Urkel, did I do thaaaaat, we did skits at the end for the parents with all our stuff on display.  And they gave awards to everyone, best painting, best water color, best use of red glitter, best flag, most athletic, everyone got one.  So I was waiting, sitting, everyone around me getting awards.  Finally the ceremony ends and they hand out the rest to those of us getting awards for less public showcase worthy titles like most likely to set the place on fire and most times pooped their pants.  I got mine, I still remember my award.

Most Cooperative.  Least likely to make a fuss, most likely to follow directions, first in line when the counselors said to go somewhere, do something, best listener, least rebellious.   It wasn’t for one thing, because there wasn’t one thing that I did well.  I didn’t color outside the lines, I didn’t paint the Israeli flag in different colors.  I just did as I was told.

In that moment at that time in that wooden cabin in the purple shorts my parents let me wear all the time I don’t care if I was 8 years old, I knew who I was.  And I didn’t like it.  I know it’s hard to believe that an 8 year old can have a life altering epiphanal moment but I did.  I promised myself that from that moment on I wouldn’t just accept everything told to me, that I would do things because they made me happy because they were the right thing to do because that’s how I would do it, not because that’s what you told me to do.  Don’t just cooperate to win an award.  Trust me, it’s a shitty award.

There is an argument floating around the cosmos that by and large people are simple, short sighted beings.  Cooperative beings.  They like the things they like, they have their worlds, they want to go to work, eat cheeseburgers, and watch Monday Night Football.  And I accept that for the most part that’s all people need to worry about.  “People” don’t want to think about the world at large and they shouldn’t have to.  A steel worker in Indiana doesn’t necessarily need to concern him or herself with the after school programming needs in the Bronx.  He or she shouldn’t have to.  But someone does, and someone should.  These people need to stop using simplicity as an excuse.  A simple and ill informed constituency is not an excuse.  Instead of using that as a stepping stool to the platform of condescending “well-you-see”s and “this-is-far-too-complex”s, why not use it as a stepping stool to “let’s-talk-about-this”s and “now-we-all-understand”s.

The need isn’t just to have an intellectual debate, although no one would argue that as a strong societal characteristic, the need is to be able to have such a debate.  To make accessible the necessary tools to have such a debate, and we are far, far away from that point.  Change doesn’t happen overnight.  Change, true and institutional reform in the way people think and learn and behave isn’t a quick fix.  I just wonder why it’s easier to spend 170 dollars on a bagel than it is for people to realize that you shouldn’t be able to spend 170 dollars on a bagel.  When did we decide that was ok?  The wool isn’t over our eyes anymore.  Unless I missed a very important meeting, which must have served very expensive bagels.

From Brazil to Boroughs

New York City likes to proclaim itself the “crossroads of the world.”  The center of global economic and cultural development.  If New York City is going to stand on such a platform, how can we get something so obvious so wrong?  How can 51 people decide how to spend the people’s money, and how can 1 person decide how much those 51 people are allowed to spend?  Trusting the City Council to allocate 66 billion dollars of the city’s budget is tough enough of a job.  But the money intended to funnel directly to the citizens being hidden behind process and inaccessible seems downright Stalinesque.  Let, not just let, but give the people insight, give the people a voice, give the people power, and trust will surely foster.  Some parts of the world outside of the crossroad understand this.  The first to understand and implement these concepts into tangible action is Brazil.

After years of militaristic and oppressive rule, Brazil finally achieved independence and established democracy in 1988.  Their newly founded constitution brought in several dramatic democratic ideals, including a strong focus on citizen participation.  “Article 26 requires participation of civil society organizations in the elaboration of public policy and articles 204 and 207 require popular participation in the formulation and control of health and social security.”  Their goals in requiring participation of its people in their government were focused around four principles:  “1) direct citizen participation in the decision making process 2) transparency to prevent corruption 3) improvement of infrastructure and services focusing on the poor and 4) eradicating clientelistic practices and transforming residents into empowered citizens capable of pursuing their rights.”  The results have been astonishing.  Beginning in Porto Alegre, just under 1000 people participated in 1989.  In 1992 that number jumped to 26,000, and the principles began to spread throughout the country.  In Rio Grande, between 1999 and 2002 participation rose from 188,000 to 333,000.

The process is rooted in a grassroots style, empowering the citizens to educate one another, to debate with one another, to identify and resolve issues amongst one another.  It is not to say that government has been removed from the process either.  A report put out by the Inter-American Development Bank commented that “participants in the [participatory budgeting process] include the leadership that shapes popular opinion, drives the social agenda and mobilizes communities.  Hence the important practical dimensions of the [PB] as a partnership building process rather than an expedient electoral strategy.” A process used to bridge government to its people, creating an open culture of education, participation, and trust.  The process found such success that it has spread all throughout Brazil, through numerous Latin American countries, skipped over the southern chunk of America, made its way through the Lincoln tunnel and spread uptown, over the Queensborough Bridge, and down the Brooklyn bridge.

Last year, four progressive Councilmembers – Melissa Mark-Viverito, Eric Ulrich, Jumaane Williams, and Brad Lander – launched what they called an experiment dubbed “Participatory Budgeting.”  Each Councilmember set aside one million dollars of their discretionary funding for projects to be proposed by, debated by, and instituted by their constituents.  The project tapped into the nostalgia of true democracy.  People gathered in libraries, school gyms, community centers, carrying their tri-fold poster boards of ideas, pitched their ideas, voiced their concerns to one another, and did so periodically over the course of several months.  The project culminated in a vote by the constituents, open to all who wanted to participate, voting for the top ideas to receive funding.  The results were tallied on site and written in on a giant neon posterboard.  While the numbers might not seem astronomical, some districts seeing around 100 participants, the concept has begun to seep into other communities, spreading from the ground up, and already has been promised in numerous other districts come the next fiscal year.  The ‘experiment’ is moving further away from a concept and more to a ‘process.’

It is difficult to measure the results of a non-tangible concept.  Can we measure trust in government?  Can we quantify the honesty of politicians?  Measuring the success of the participatory budgeting project in New York City may seem impossible, but the fact that it happened and the groundwork laid for expansion is success enough.  New York City doesn’t need to institute total reform as Brazil has.  Let the Council do its mandated duty of balancing the City budget.  But if we’re going to have a portion of the budget set aside for local programs, increased public participation will only strengthen the bonds between constituents and their representatives.  Increased participation will keep potential thieves on their toes.  If Larry Seabrook had to pitch his shell company ideas in front of his constituents and asked them to fund the pockets of his family and friends’ bank accounts, I would imagine those not in his immediate family would have dealt with him long before the US Attorney General would have to.  Full disclosure, clear transparency, open dialogue, active engagement.  None of these popular buzz phrases spawn from secrecy and corruption.